Woo Bike Share provides University of Worcester’s staff and students a convenient and low cost way to travel and exercise. In 2018, 50 electric e-bikes were added to the University’s fleet of 50 pedal bikes, totaling to 100 bikes available for use.

A few students and staff at the University of Worcester participated in a one-week Woo Bike test trial of the electric e-bikes, and agreed to share their experiences.

Our testimonial this week comes from Léonie Shuck, an administrator at the University of Worcester. 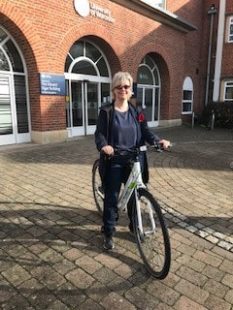 Staff or Student: both

What did you enjoy about riding a Woo bike?

I really enjoyed the power of the electric bike, especially going uphill.

Why did you want to try out the Woo bike?

I wanted to try out an e-bike as I live on top of a high hill in Worcester.

What are the advantages of riding a Woo bike?

I found it easier to climb hills, and to negotiate traffic, because you can move from a stop much easier and quicker.

Were there any challenges when riding a Woo bike?

It’s not as easy to control when negotiating tight spaces, or when going very slowly and carefully. It’s also heavier to carry or handle, and you have to be aware of when the charger unit is about to run out.

Would you recommend Woo bikes to other cyclists or those wanting to begin cycling?

I’m not sure – it depends on the sort of terrain/journeys they are undertaking and what might put them off cycling. It certainly makes it easier to ride if you were worried about going uphill or for longer distances.

It is important, because:

Any additional/relevant comments of your personal experience with the Woo bike?

Nothing further about the Woo bike in particular, though I will add that the main problem I have with cycling is the lack of cycling paths/dangerous driving on my route to/from work. What would probably help the most is a camera that can be added to the helmet/handlebars to video careless/negligent/hostile drivers, with advice on how to forward the results onwards.

To read more testimonials and information about University of Worcester’s Bike Share, click on one of the articles below: