It’s really about celebrating what’s good locally and regionally in terms of great food and drink.

Our region has a fantastic array of great producers out there and many largely supply within this region only. This regional business model is often much more sustainable and results in a lessening of ‘food miles’ and with that, the use of fuels for deliveries and the linked potential emissions. Additionally, by highlighting what’s on people’s doorstep in the region more it also potentially helps encourage shopping locally. If we use and support our local shops more – even just a couple of additional days in the week, then it helps support those local producers and businesses – bringing much needed money into the local economy. We also know via the New Economics Foundation (NEF) report ‘Plugging the Leaks‘ that for every pound spent in local highstreet shops, that roughly 80p of this stays local and benefits local businesses and people. Whereas a similar pound spent at a large supermarket gets almost completely syphoned-off away out of the local area. 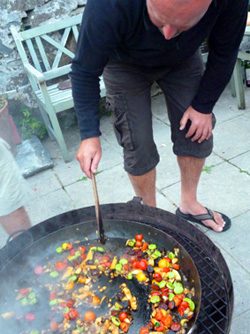 Local and regional foods are often just too expensive for supermarkets to stock due to their economies of scale and large central distribution & cold store networks etc. As such, the ‘Local Food Lunches’ Facebook page was born – it’s my way of pushing this area – which by proxy hopefully also means supporting and celebrating local and regional shops, food and drink producers too.

We’d like as many people to be involved as possible in supporting their local and regional food and drink producers and highstreet shops. Given my point about pounds spent locally, even one or two more people using their local shops – just once or twice a week instead of a large supermarket, could start paying dividends to the local economy pretty swiftly.

There’s a growing movement now that is helping to highlight and celebrate quality local food and drink – especially so around Ludlow, which has always had a reputation for being a ‘foodie’ town. As well as using your local highstreet shops, there are now growing numbers of farmer’s markets (for example Shropshire Farmer’s Markets), local producer’s markets (for example the Teme Valley Market) and even a local food ‘superstore’ dedicated sourced mainly from local and regional producers near Ludlow now. My ‘Local Food Lunches’ Facebook page is an open community which looks not just at ‘local’, but also ‘seasonal’ and certain ‘wild’ foods available at any one time too. Anyone can view or join in with – you don’t need to be a Facebook member or subscriber to view it either. If you do have a look though, are a Facebook member and find it of interest, then you can ‘like’ it if you want my posts to appear on your own timeline/newsfeed. We’re getting a growing number of subscribers add their own related posts on the page as well – which we’d heartily encourage more of too – it all helps the discussion in this area.

One aspect of buying local foods that may also appeal to students who want good food but on a budget might be the ‘cost per plate’ feature that I try to include on any dishes featured.. This rarely (assuming the meal is made for two or more) works out to more than about £3 a plate – even for some of the more exotic of ingredients such as local game etc. The aim of this really is to help people realise that ‘buying local’ a little more needn’t mean spending more money.

To our delight, ‘Local Food Lunches’ seems to be a growing phenomenon with more subscribers by the week (we recently celebrated our 100th subscriber). It’s also been covered in the regional press, is linked to on the University’s own ‘sustainability’ food pages and we’re now part of the Malvern Hills Food Alliance (MHFA) too – which encourages the growing, cooking and eating of foods from the region.

It’s probably unrealistic to expect all who read this to ‘shop local’ for all and any food in the week but it’s not too much more work to occasionally drop into a smaller high street shop as you pass to see what they’ve got in season (this can relate to both vegetables and different types of meats – which are more abundant at certain times of the year i.e. ‘spring lamb’ and ‘purple sprouting broccoli’ etc). When in season many of these foods are very reasonable price-wise. So if you’re cooking for just one or two people, or even a family, then it needn’t cost a fortune to get a great local or seasonal meal underway. You’ll often get a warm feeling into the bargain too as you’ll be supporting your local highstreet shops.

For a quick, simple and tasty meal idea why not try the River Cottage’s Broccoli Gratin (with fresh/seasonal or some frozen broccoli). Supremely filling and it won’t break the bank!